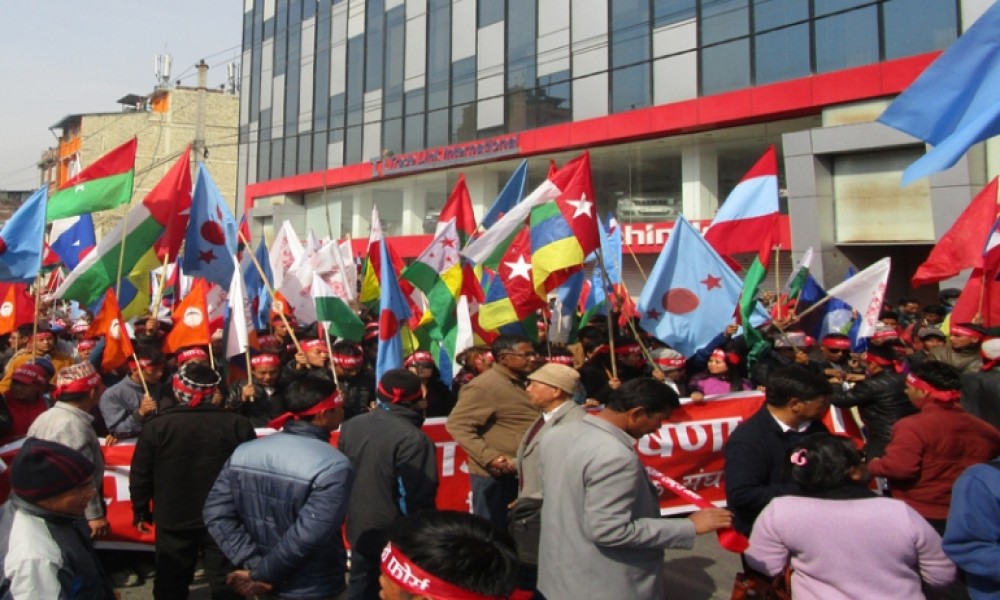 Indigenous Peoples known as Aadivasi/Janjatis are an integral of the Nepali nation-state. They have made immense contributions to the national building process. But, the state has always neglected and marginalized them in a systematic way. Although the Nepali society is diverse ethnically, culturally, linguistically and religiously, the state has never embraced multiculturalism. As a result, indigenous peoples were excluded from the state's mechanisms and policies; and became poor and marginalized.

Indigenous Peoples have long been struggling, in organized or unorganized way, against their exclusion, marginalization and injustice. The 1778 uprising of Limbus against the state's suppression of their mother tongue, the 1798 revolt of Nuwakot's Tamangs for their autonomy, the 1808 movement of Rais for rights over their land, Sukdev Gurung's fight for autonomy in Lamjung in 1858, Lakhan Thapa's revolt against the Rana regime in 1876, Supati Gurung's revolt against the Ranas in 1877, boycotting of Dashain festival in Dhankuta around the same time, the 1885 movement against burning of Buddhist religious texts by the state and the linguistic movement of Kathmandu's Newars in 1965, movement of Chepang farmers in 1975 and the 1988 movement of Kathmandu's Newars and Taplejung's Limbus for their mother tongues are some historic events. But, most of Indigenous Peoples do not know much as these historic events were successfully suppressed by the state.

Although the Nepali society is diverse ethnically, culturally, linguistically and religiously, the state has never embraced multiculturalism. As a result, indigenous peoples were excluded from the state's mechanisms and policies; and became poor and marginalized.

After unifying Nepal in the mid-18th century, Prithvi Narayan Shah famously dubbed it as a garden of four Varnas and 36 castes. But, the Shah Kings cemented the concept of Hindu hierarchy, giving more power to Bahun and Chhetri clans. In addition, they also launched Hinduization campaign in a bid to unify Nepal culturally as well. As part of Hinduization campaign, Indigenous Peoples were forced to embrace Hindu religion, culture, festival as well as social norms and values. Hindus' Khas language became the official language and all ethnic communities were forced to use it. Cow was recognized as a symbol of Hindu religion. Shah Kings issued decrees imposing a ban on slaughtering of cows.  Indigenous Peoples' distinct languages and cultures faced threats from the state's policy. It led to several revolts by Indigenous Peoples.

The Ranas who came to power after the Kot Massacre of 1846 also promoted Hindu religion and culture in a bid to strengthen their rule.  Muluki Ain (the law of the land), issued by the founder of the Rana regime Junga Bahadur Rana after his return from the UK, was an effort to promote Hindu religion and culture. Muluki Ain was not a new law but merely a reassertion of ages-old Hindu norms, values and practices. It legalized Hindu caste hierarchy that was first introduced by the Shah rulers. It was discriminatory. It had provisions for different kinds of punishment for different castes for the same crime. Muluki Ain deprived Janajatis and Muslims of their rights to eat beef by criminalizing slaughtering of cows. The ulterior motive of Muluki Ain was to bring diverse ethnic communities under the state's control.

After the fall of the Rana regime, new definition of nationality emerged in the party-less Panchayati system. It also aimed at developing Nepal as a Hindu nation. For this, the Panchayat state adopted policy to promote one caste, one language and one religion/culture. Nepal was declared as a Hindu kingdom. By ignoring Nepal's diversity, the state spread false belief that social unity and harmony existed in the country. Those who sought their ethnic identity were deemed as anti-nationalists. Organizations of indigenous people were discouraged. Due to such a regressive approach by the state, Tharu Welfare Association (1951), Gurung Welfare Association (1954) and Nepal Tamang Committee (1956) could not thrive all throughout the

It was only when a referendum was held in 1979-1980 that institutional development of identity politics became possible. It was when the Newars of Kathmandu launched a campaign to promote their new year. Khagendra Jung Gurung, Bakhan Singh Gurung, Padma Sundar Lawati and M S Thapa demanded ethnicity-based federal states. But, the referendum result favored the Panchayati government and Janajati movement suffered a setback.
Around that time, newspapers began coverage of activities of an under-ground ethnic outfit named 'SheTaMaGuRaLI'. SheTaMaGuRaLI was a sort of abbreviations of Sherpa, Tamang, Magar, Gurung, Rai and Limbu. But, indigenous leaders who were active in politics at that time say that there was no organization as such. In fact, that was a ploy by the cronies of the Panchayati system to depict indigenous leaders as communal.

This write up was prepared on the basis of paper presented in the 'Ethnic Studies Series' conducted by Indigenous Media Foundation, some two-years ago.