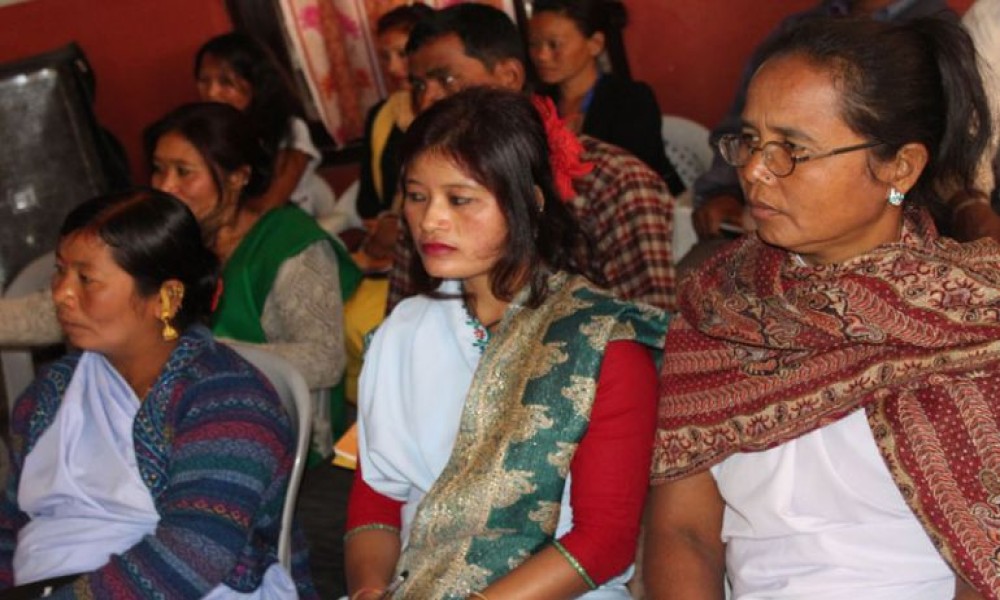 Over the last decade, women from historically marginalised groups such as Dalits, Madhesis and Adivasi Janajatis have consistently stressed the importance of recognising diversity among Nepali women. Yet the “mainstream” women’s movement, which shapes the discourse of women in Nepal, has failed to include their voices. In most cases, the exclusion is deliberate. Here I will give just one among numerous examples to illustrate this.

Dev Rai, who hails from a village in Sankhuwasabha, has been actively involved in indigenous people’s issues for the last 12 years. He now lives and works in Kathmandu. In 2009, he was working as a programme manager at a reputed NGO that champions the rights of women. The election to the first Constituent Assembly had just ended. For the first time in Nepal’s history, the political environment seemed somewhat favourable for raising the issues of marginalised groups. He thought the time was right for the NGO to carry out activities specifically targeted for indigenous women.

Like most indigenous women activists, Rai believes that problems faced by Nepali women differ in nature and magnitude depending on their caste or ethnic identity. With this in mind, he designed 19 “pilot activities” targeted for Danuwar women in Udayapur district, an area where the NGO had been working for some time. The activities aimed at increasing Danuwar women’s knowledge about their cultural and economic rights. Rai meticulously prepared the “logframe” for the activities and developed the “output, results, and verifiable indicator”. He knew the budget was not a constraint because the NGO had adequate funding for “women empowerment”. Once the project activities were completed, he hoped to deliver trainings for men as well as non-indigenous women in those areas to familiarise them with the multi-layered challenges faced by Danuwar women. He strongly believed (and still does) that understanding and empathising with the experiences of marginalised peoples strengthens rather than disrupts social harmony.

In short, there was nothing radical about Rai’s proposed activities. It was well in accordance with the accepted norms and practices of the NGO world. The only difference was that the activities were aimed at women from a highly marginalised community.

Yet the “mainstream” women’s movement, which shapes the discourse of women in Nepal, has failed to include their voices.

But when he laid out his plans before the NGO head, she scrapped his proposal without asking for an explanation. Rai was told that such activities would lead to “division” and “conflict” within the community. When he tried to explain his rationale, he was made to appear like a tribal-minded extremist. The NGO head, who belonged to a privileged caste group, loftily suggested that he rise above communal loyalties and focus on working for “all Nepali women”.

Two months later, the NGO organised a five-day “strategic planning meeting” at the Godavari Resort. National and international experts and intellectuals were invited to the meeting. One of the sessions was devoted to conducting a SWOT analysis of the NGO—a commonly used method for evaluating the strengths, weaknesses, opportunities and threats faced by an organisation. The team identified “identity politics and fundamentalists” as the biggest threats to the NGO. The NGO head argued that such threats weaken the women’s movement and need to be contained. Rai had become a “threat” for having raised the issue of marginalised indigenous women. A month later, he handed in his resignation letter where he clearly elaborated his reasons for quitting.

Rai laments that not a single colleague stood up for him. The few colleagues who belonged to the marginalised groups sympathised with him in private but did not dare openly support him. This did not surprise him though. He knew that the rare Janajati, Madhesi or Dalit who works in an I/NGO (or any “mainstream” organisation for that matter) must exercise a degree of self-censorship to avoid offending their seniors or colleagues. Vastly outnumbered by high caste people, the Janajati, Dalit or Madhesi in such organisations can only “fit in” by pretending that identity does not matter. Those who complain that the Janajatis and Dalits are taking away all their jobs would do well to check the ethnic composition of most organisations in Kathmandu. Such tokenistic representation of marginalised groups is helpful only insofar that it allows organisations to tick the right boxes and attract more funding.

And yet the pernicious myth prevails that inclusion is a “donor funded” agenda. Many women activists from the marginalised groups can barely articulate themselves in Nepali. How can they even begin to compete with those who have mastered the language of donors? A 2012 report titled ‘Rights, Share and Claims: Realising Women’s Rights in South Asia’ by South Asian Women’s Fund stated, “Large ‘mainstream’ women’s organisations receive the lion’s share of funding, due to their personal connections with donors (attributed to their upper caste, English speaking privileges) and their greater accessibility to donors.” By contrast, the report adds, organisations run by women from marginalised communities are the “worst off among women’s organisations” in terms of receiving funding.

The so-called mainstream women movement has a long way to go before it can claim to represent “all Nepali women”.

A remark by Meena Acharya, a well-known economist and women rights activist, encapsulates the “mainstream” attitude toward the demands of marginalised women. In a 2010 paper titled ‘Diversity and Unity of Feminist Movement in Nepal’,  Acharya writes that “…ethnic women’s movement [is] guided primarily by the ideology of revenge for their past oppression, rather than by a vision of a truly democratic, equitable and just state and society.” It is unfortunate that a widely respected feminist like Acharya views the aspirations of marginalised women through such a narrow and twisted lens. Clearly, the so-called mainstream women movement has a long way to go before it can claim to represent “all Nepali women”.