The International Year of Indigenous Languages, 2019 (IYIL2019), a global campaigns declared by the United Nations was launched officially at a special program on Monday at the headquarter of United Nations Educational, Scientific and Cultural Organization (UNESCO), in Paris, France, while UN General Assembly (UNGA) has slated to launch it convening a high-level meeting of UNGA on 1 February, 2019.

UNESCO, the lead organization at UN coordinating the year-long celebration, said that this global initiative is commemorated  throughout year under the slogan 'indigenous languages matter for sustainable development, peace building and reconciliation'.

In the year 2016,  by passing a resolution, the UN General Assembly proclaimed the year 2019 as the International Year of Indigenous Languages based on a recommendation by the UN Permanent Forum on Indigenous Issues (UNPFII).

UNESCO has developed year long action-plan establishing a steering committee, mainly in consultation and cooperation with member states, the expert members at UN Permanent Forum on Indigenous Issues (UNPFII), the Special Rapporteur on the Rights of Indigenous Peoples and member experts at the Expert Mechanism on the Rights of Indigenous Peoples, as well as indigenous peoples and a range of different stakeholders, coordinator of social media partnership at UNESCO, Irmgarda Kasinskaite-Buddenberg, Programme specialist, Khowledge Societies Division, said while briefing about the UNESCO's role to social media partners.

The International Year has also been conceived to contribute to the attainment of the goals of international standard-setting instruments concerning indigenous peoples, notably UNDRIP, 2007, the ILO Convention no. 169 (1989) and the outcome document of the World Conference on Indigenous Peoples (2014). It is also intended to promote the United Nations system-wide action plan on the rights of indigenous peoples, and other relevant regional and national frameworks, as well as facilitating the achievement of the United Nations 2030 Agenda for Sustainable Development.

UNDRIP article 13 states that indigenous peoples have the right to revitalize, use, develop and transmit to future generations their languages and oral traditions.

Indigenous peoples constitute at least 5000 distinct peoples with population of 370 to 500 million, living in 90 different countries. Indigenous languages make up the majority of the world’s estimated 7,000 languages.

Indigenous peoples constitute at least 5000 distinct peoples with population of 370 to 500 million, living in 90 different countries. Indigenous languages make up the majority of the world’s estimated 7,000 languages and, like all languages, they are depositories and vehicles of culture, knowledge, values and identity, whose loss represents an impoverishment for humanity as a whole, and a tragic disempowerment for the communities that have been prevented from transmitting their mother tongue to their children.

"Indigenous languages represent complex system of knowledge, developed and accumulated over thousands of years. Local languages are cultural treasures.They are repositories of diversity and key resources for understanding local environments and harnessing their potential to the best advantage of local populations, as well as of humanity as a whole. They foster and promote local cultural specificities, customs, and values," reads the agenda produced by UNESCO.

Shockingly, a language is becoming extinct every two-weeks, ultimately as many as 50 to 90 percent of languages are likely to disappear by the end of the century, unless any measures are taken the access to, and promotion of, indigenous languages and to a concrete improvement in the lives of indigenous peoples by strengthening the capacity of indigenous language speakers and organizations working in the sector' reads the documents provided by UNESCO.

According to UNESCO, though the reasons vary across different communities, and locations for the endangerment of languages, however some common reasons are --assimilation, enforced relocation, educational disadvantage, illiteracy, migration including other manifestations of potential discrimination leading to the possible disappearance of a culture or language.

Indigenous peoples are often excluded socially and politically in the countries they live in, by the geographical location of their communities, their separate histories, cultures, languages and traditions.  And yet, they are not only leaders in protecting the environment, but their languages represent complex systems of knowledge and communication and should be recognized as a strategic national resource for development, peace-building and reconciliation.

Celebrating International year of Indigenous Languages 2019 will help promote and protect indigenous languages and improve the lives of those who speak them.

They also foster and promote unique local cultures, customs and values which have endured for thousands of years. Indigenous languages add to the rich tapestry of global cultural diversity. Without them, the world would be a poorer place.

Celebrating International year of Indigenous Languages 2019 will also help promote and protect indigenous languages and improve the lives of those who speak them.  It will contribute to achieving the objectives set out in the United Nations Declaration on the Rights of Indigenous Peoples (UNDRIP) and the Sustainable Development Goals (SDGs) to be achieved by 2030.

Similarly, UNESCO further says, the celebration of the international year of indigneous languages will encourage all stakeholders to respond appropriately to these challenges, by promoting and protecting the right of indigenous peoples to preserve and develop their languages.

Lists of countries having languages more than 100

In 23 countries altogether 5989 languages are being spoken, source : ethnologue, 2005

The UNESCO launched a website (https://en.iyil2019.org/) in August 2018 to consolidate year long events and to help raise the awareness on the IYIL2019 so as to document all necessary outcomes relating Indigenous languages and encourage stakeholders to take urgent actions to preserve, revitalize and promote indigenous languages around the world.

Indigenous Television is a 24-hour channel has been producing and broadcasting Television programs, into over one-and-half dozen indigenous languages including Nepali and English.

Launched on the occasion of the World Indigenous Peoples Day on 9 August 2016, Indigenous Television is a 24-hour channel has been producing and broadcasting Television programs, into over one-and-half dozen indigenous languages including Nepali and English.

Indigenous Peoples of Nepal are officially described as Indigenous Nationalities (Adivasi Janajati). They make up for 35.81 per cent of the country's total population (approximately 8.5 million out of the 26 million Nepalese). According to 2011 census, Nepal has 126 castes and ethnic groups speaking as many as 123 languages. And 90 percent of these languages are spoken by Indigenous Peoples. (www.indigenousmediafoundation.org)

Out of 123 languages, some 37 languages are in the verge of extinction and some 29 languages have only speakers less than one thousand in Nepal.

Out of 123 languages, some 37 languages are in the verge of extinction and some 29 languages have only speakers less than one thousand in Nepal. 1990 Constitution for the first time declared Nepal as 'multi-lingual country, followed by Interim Constitution 2007 and new Constitution 2015. There is hardly any scientific study on the status of indigenous languages, how they have been used in practice. Except Nepali, indigenous languages have hardly been medium of education, information and official language of government business in Nepal. 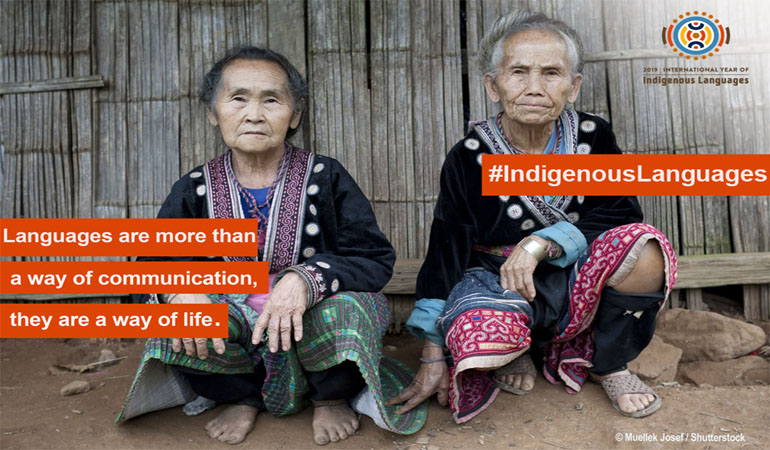