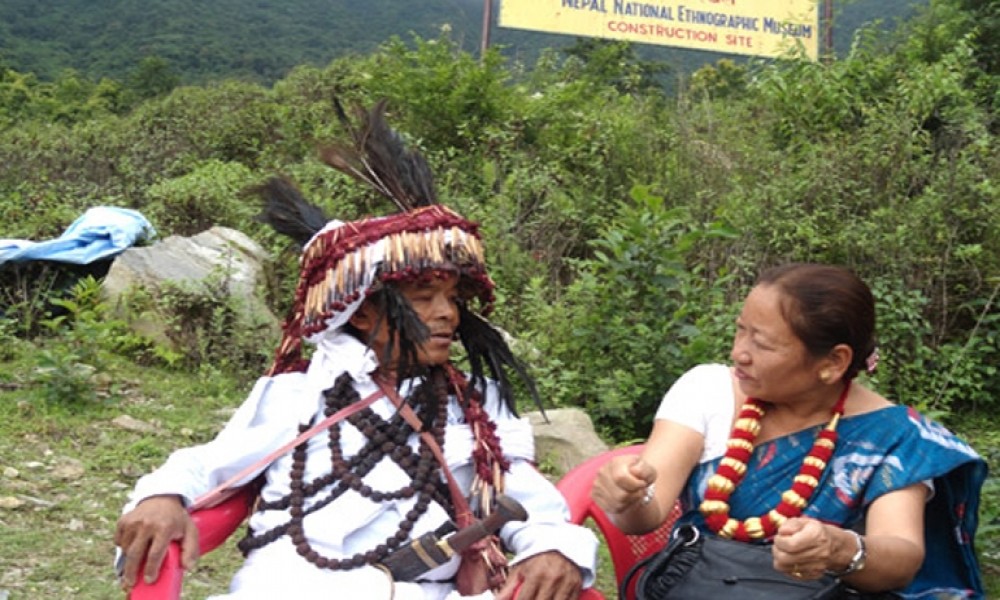 Born in Ratanchha VDC-7 of Khotang district, Lila did not get a chance to go to school. She just learnt to write her name and address. But, lack of education did not deter her from carving her own niche.

All her life, Lila wove hand-made Khadi clothes, inspiring other illiterate women of her villages to become financially independent. Her products have become popular among Kirant people living  within the country and abroad. The award given by the National Foundation for Development of Indigenous Nationalities (NEFIN) in recognition of her contribution to promotion of indigenous knowledge and skills.

People started weaving and wearing clothes in the early stage of their civilization. When they first felt embarrassment, they started hiding their private parts. Afterward, they developed skills to weave clothes.

Civilization is a reflection of a society's overall growth while culture is an abstract process. Culture denotes arts, literature, philosophy, language and religion and many more.

Civilization is a reflection of a society's overall growth while culture is an abstract process. Culture denotes arts, literature, philosophy, language and religion and many more.

Culture expert Dr Jagman Gurung believes culture and civilization are always entwined. "While civilization is a physical growth, culture is mental development," he says. "The way people are living shows their mental state and their lifestyle is part of culture, which is transferred new generations."

Nepal now boasts of 125 castes and ethnicities and 123 languages and dialects. After the political changes of 1990 and 2006, many ethnic communities came forward demanding recognition of their existence and culture.  And it is good for promoting Nepal as a multi-ethnic, multi-lingual, multi-cultural and multi-religious country.

Dr Basudev Krishna Shastri, a researcher of culture, wants to describe Nepal as 'multi-dimensional'. "Our diversity is our heritage, too," says he. "The state needs to recognize this diversity. We cannot grow as a prosperous country if we fail to accept our diversity."

Tirtha Raj Mukarung Rai, a culture activist, says ethnic communities' distinct food, attire and musical instruments form their distinct identity. "If we want to preserve our culture, we must be able to demonstrate it," says he.

Rai, an executive member of National Ethnographic Museum, says, "it is important to exhibit our distinct culture at public fares and programs. We must always give priority to preserving our culture. Over the last couple of decades, affinity of ethnic communities with their identity and culture has grown stronger. They are wearing their ethnic attires in public gatherings.

"As most men from ethnic Gurung communities of  Lamjung and Kaski work abroad, their wives have enough time to spend," says he. "So, they started serving their society by forming Mothers' Groups." According to him, the concept of Mothers' Group was developed by Dr Harka Gurung while Dr Chandra Prasad Gurung executed the idea of eco-tourism in Taplejung. Both of them died in a helicopter crash while visiting Annapurna Conservation Area Project (ACAP), Taplejung.

Mothers' Groups have now spread all over the country as a form of social revolution .Similarly, ethnic communities are providing home-stay service, which is part of eco-tourism. Both these Mothers' Groups and home stay facilities have proved to be instrumental in promoting ethnic identity and culture.

At home-stay facilities, ethnic communities perform almost-extinct cultural dances like Ghatu and Sorathi. Dr Gurung says, "The true purpose of home-stay is to serve tourists with our own food, beverage. Why do we buy beers? Why can we not serve them with our home-brewed liquor? It serves both our purposes: business and promotion of culture."

Culture activist Ganesh Ram Lachhi believes ethnic culture is now facing threats from modernism and stresses need to preserve it. "In Newar community, new generations are attracted to modern musical instruments. We need to restore their interest in their traditional musical instruments," he says. "The government also needs to support preservation of ethnic musical instruments."

Tourism expert Dr Hum Bahadur Gurung says nature and culture are foundation of tourism. Preservation of local culture and natural beauty will help tourism sector to flourish, he says. "Tourists are attracted to our nature, religious and cultural activities and ethnic diversity," he says. "If we promote our distinct culture, tourists will flock to our country. Tourists would love to see, experience and taste our specialty."

Culture researcher Shastri says one of the purposes of federalism is to preserve and promote cultures of all castes and communities. "Preserving and promoting our diversity will help us prosperous, too," he says.

Lila, winner of Aadivasi National Pride Award-2015, says it is not good to imitate foreigners' lifestyle. "By promoting our own culture, we can be a prosperous nation," she says.