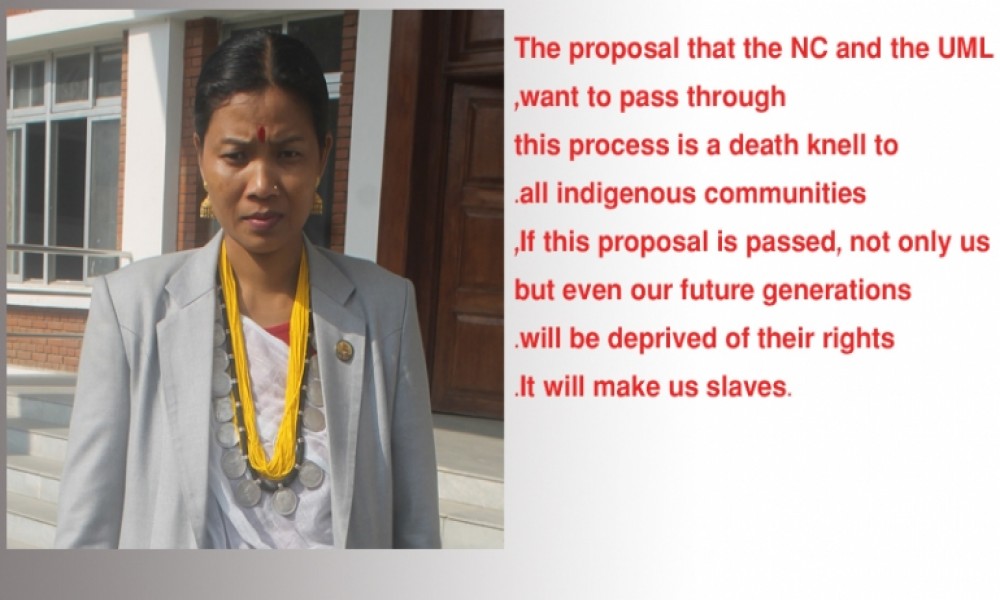 Rukmini Chaudhary, Chair of Federal Democratic National Front (Tharuhat), is a Constituent Assembly (CA) member. Out of the 30 political parties present in the CA, Chaudhary's is the only party that has a woman as its Chair. Here are excerpts of an interview with her.

Is it true that your party is quitting the 30-party alliance led by the UCPN (Maoist)?

It is just a rumor. We cannot even think of separating ourselves from a movement meant for ethnic identity based federalism and inclusion of all oppressed and marginalized communities.

So, how did this rumor spread?

It is a ploy by those who want to weaken us. Mainstream media also helped spread this rumor. But, I do not think this kind of propaganda will weaken us. It will instead motivate us to be strong in the days ahead.

It is a ploy by those who want to weaken us. Mainstream media also helped spread this rumor. But, I do not think this kind of propaganda will weaken us. It will instead motivate us to be strong in the days ahead.

The UCPN (Maoist) has decided to boycott meetings of all parliamentary committees. What about your party?

Our party has yet not decided on this issue.

And, what about not cooperating with the CA Chair Subash Nembang?

Yes, we are not cooperating with him. First, he has to correct his mistake. He has made a mistake by forming Proposal Drafting Committee (PDC).

Will your non-cooperation affect the PDC in any way?

Out of the 30 parties present in the CA, 18 parties have boycotted the PDC. So, how can the PDC proceed without cooperation from so many parties? It will not be acceptable to the people.

Your party has been advocating for rights of Indigenous Peoples and the CA Chair Nembang also belongs to an indigenous community. So, why are you opposed to him?

We supported Nembang to become the CA Chair. But, the way he announced the PDC is autocratic and against the CA's rules of procedure. It is also against Interim Constitution, the spirit of the April Uprising-2006 and the past agreements reached between the government and indigenous communities.  The CA Chair's role should have been like that of an umpire. An umpire cannot score a goal. But, Nembang forgot that he is in an umpire's role and scored a goal on behalf of the ruling NC and UML. Although he belongs to an indigenous community, he acted like being a Bahun.

Do you not think that Nembang had to take this move after opposition parties, including yours, vandalized the CA properties?

What we did in the CA was a consequence of what the NC and the UML did to us. They tried to go against the spirit of the Interim Constitution and the CA's rules of procedure, forcing us to resort to vandalism. If the NC and the UML were in our position, they would have become much more violent. They spread rumors that damage that we did cost the CA Rs three million. But, it was not that damaging, it cost the CA only about Rs 0.8 million.

But, how long can we wait in the name of consensus?

There should be consensus in accordance with the Interim Constitution, past agreements and the CA's rules of procedure.

There should be consensus in accordance with the Interim Constitution, past agreements and the CA's rules of procedure. If there is a consensus, it will not take even a week to write the new constitution. But, if we follow the process initiated by the NC and the UML, it will take 126 days. So, you decide yourself which side wants to bring the constitution at the earliest?

Why are you against the process initiated by the NC and the UML?

The proposal that the NC and the UML want to pass through this process is a death knell to all indigenous communities. If this proposal is passed, not only us but even our future generations will be deprived of their rights. It will make us slaves.

Could you please explain this?

In their proposal, the NC and the UML have proposed seven federal provinces with each spreading across Mountainous, Hilly and Tarai region. If federal provinces are created like this, each province will be again dominated by Hill Brahmins and Chhetris.

In their proposal, the NC and the UML have proposed seven federal provinces with each spreading across Mountainous, Hilly and Tarai region. If federal provinces are created like this, each province will be again dominated by Hill Brahmins and Chhetris. The NC and the UML want to allocate only 20 per cent seats under Proportional Representation (PR) electoral system. It means that proportion of marginalized communities will be very less in the parliament. If this electoral system is followed, representation of marginalized communities will be even less than it was after the first general elections. They say they want to put a threshold of three per cent. By putting this threshold, they want us to act at their behest. It is a ploy to throw us out of politics. They are for making Nepali as the official language. It again excludes marginalized people. It is also against international conventions.

But, do you not think that those who are in a majority have rights to make decisions in democracy?

It can happen in the parliament, but not in the CA. Constitution is a consensus document. In the first CA, we had 427 lawmakers supporting identity-based federalism. But, the NC and the UML, not have two-thirds strength, opposed us. Now, they have just 413 CA members and threaten us with their two-thirds strength.

So, what will the opposition do if the NC and the UML write the new constitution using their two-thirds strength?

We will call a nationwide shutdown.

People are tired of such shutdowns. Will they stand by you?

Of course, they will. Nepali people want justice, equality and inclusion. They have always stood for changes.

Those parties that emerged victorious in the last CA elections are not with you. In this scenario, how will your agitation bring about any changes?

Even Gyanendra Shah had an illusion that people were by his side. People would go to see him out of curiosity but he would believe that they were his supporters. But, he had to bow down to people. We have toppled a monarchy. It is not a big deal to topple today's so-called monarchs.