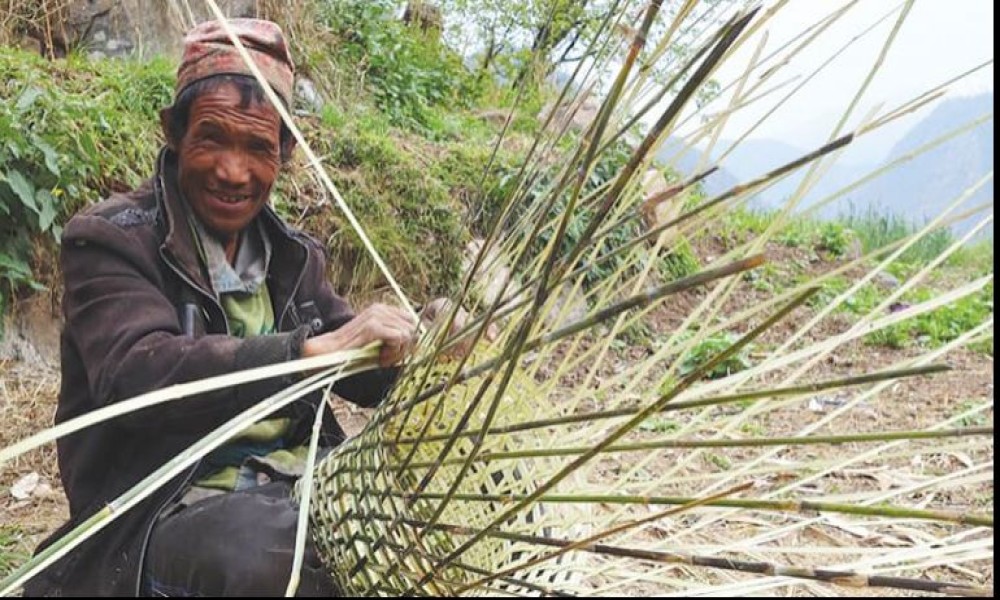 Long before commercially-manufactured modern household tools made from iron, steel, aluminum and plastic flooded the Nepali market, Tharus -- an indigenous peoples living in the mountainous country's low-lying areas -- would craft their own tools from bamboo.

However, the Tharu community's traditional skill of making various tools from bamboo is now in danger thanks to the lack of raw materials and the availability of cheap plastic products in the market.

Ram Lal Tharu, a native in Bansgadhi municipality of Bardiya district, says: "Our ancestors trained us to craft bamboo products, but we have almost forgotten our craft".

Our ancestors trained us to craft bamboo products, but we have almost forgotten our craft.

He adds: "I was myself trained to make bamboo products like Supa, Bena, Jhauwa and Diliya. But it is difficult to find raw materials for these products. Even if I find raw materials to make these tools, they cannot compete with plastic products in the modern-day market".

Phaggu Tharu, who hails from the same municipality, agrees with Ram Lal Tharu. He says: "Our younger generation can no longer make anything from bamboo. We are becoming increasingly more dependent on plastic tools that are easily available in the market".

Although Tharus used bamboo trees to make almost every tool they would need, they would use them in a sustainable manner. Their lifestyle and economic activities never harmed the nature. But they say the commercial production of plastic items is not just driving them away from their traditional lifestyle, it is also leading to an ecological crisis.

For example, Tharus would use some local herb as a poison to kill a limited amount of fish in the river. They knew where to find this herb that is poisonous only to the fish. Such poison would not harm other living beings, keeping the river ecosystem intact.

The land where indigenous people grew crops and planted trees has now been converted into community forest. Large swathes of thick forest have been declared national parks, which are guarded by the army.

But now, commercial companies are using poisonous chemical to kill fish in the river. Such chemical not just kills fish, but it also harms other living beings in the river. Tharus' indigenous knowledge about poisonous herb has been lost.

Indigenous people like Tharus never saw the jungle as a means of amassing wealth overnight. They saw it as their home, a source of life. But today, they are no longer allowed to enter the forest.

The land where indigenous peoples grew crops and planted trees has now been converted into community forest. Large swathes of thick forest have been declared national parks, which are guarded by the army. The army kills indigenous people if they enter into the very forest which they once protected.

Shalik Ram Adhikari, mayor of Bansgadhi municipality, admits it indirectly: "This is a municipality densely populated by indigenous Tharu people. The municipal office is ready to preserve and promote their indigenous knowledge and traditional skills. Their skills must be developed into a source of income. For this, we have introduced necessary policies and programs. We are also building a Tharu museum".

The Tharu community's indigenous knowledge and skills have enriched the Nepali culture and civilisation. Not just the local government, but the federal and provincial government should also work towards preserving the traditional knowledge and craft of the Tharu people.