Indigenous leaders release after a few hours of detention Indigenous Peoples (IPs) who had been participating in the peaceful assembly on Friday were detained by the police administration and released after an hour, after a storm of criticism made by the public.

The peaceful assembly was organized by human rights activist Padma Ratna Tuladhar led Indigenous Peoples National Movement-Nepal (IPsNMN) at Santibatika, Ratnapark in Kathmandu in order to pressurize government to include indigenous peoples rights in the constitution, prior to a week left to end the deadline slated by Constituent Assembly (CA) to unveil the draft constitution.

"The police authorizes nabbed the participants in the meet right from behind, they beaten to death so some of us, while the Coordinator of the IPsNMN, Tuladhar was addressing the meet," said Malla K Sundar, an indigenous peoples' rights activists. He was one of the detainees in the incident. "We neither had such experience of being detained even during the Panchayat (30-years long part less) period."

According to him, about three-dozen indigenous peoples were arrested. 10 were injured severely in the clash between the police and had to rush to the hospital.

Issuing the press release, UCPN-Maoist, and various other political parties had criticized the government's action against the indigenous peoples' movement.

Tuladhar led national movement has been taking to the street across country demanding to institutionalize the secularism, ensuring of federalism based on the identity, and address the rights of women and excluded communities including of indigenous peoples rights and so forth.

In the first round of protest program, Tuladhar led indigenous peoples movement has already conducted series of awareness raising corner meet, conducted nation-wide movement, including march pass, a campaign to occupy Baneswore, the CA building,  and so forth. After the government's move against their movement, indigenous leader and activists have called a emergency meeting on Saturday to unveil new series of stringent movement to press government to ensure their rights in the constitution.

Curtail over right to speech and peaceful assembly

Indigenous leaders and right activists criticized the government action citing to have been  curtail over their fundamental right to speech and peaceful assembly, protected by the Interim Constitution and so many international human rights instruments such as Universal Declaration of Human Rights, UN Declaration on the Rights of Indigenous Peoples (UNDRIP), ILO Convention 169 and so forth.

Talking to Indigenous Voice, former parliamentarian, Pasang Sherpa opined that Friday's incident was not merely an inference over our rights but enticing to the violence.

Similarly, an advocate Shankar Limbu said the incident to be against the human rights. 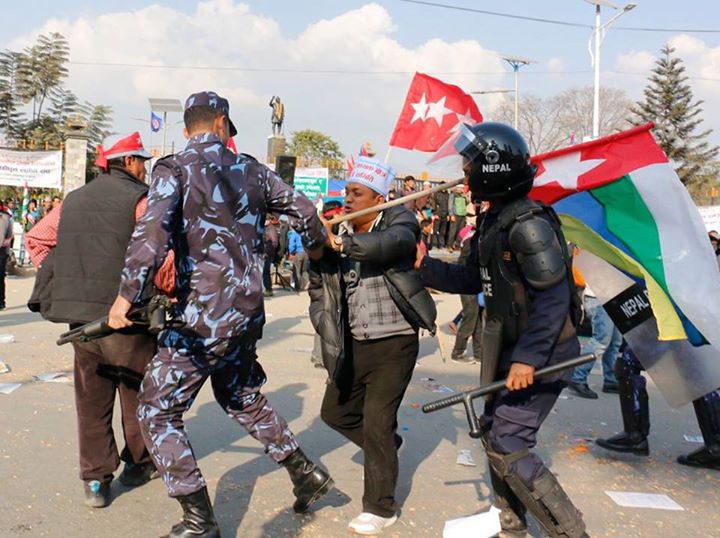