Following the unilateral decision of CA chairman Subash Chandra Nembang for formation of questionnaire committee, 30 political party alliance led by UCPN-Maoist including Madhesi front and Indigenous Peoples National Movement-Nepal (IPsNMN) on Sunday decided to take to for regular strike until and unless, the decision is corrected.

Majority of CA members presented in the CA meeting endorsed formation of questionnaire committee thorugh voice voting tabled by CA chairman Nembang. CA chair Nembang had taken this step after the opposition lawmakers constantly protested the proposal. NC and UML together make the majority and had long been pressing to end disputing issues through majority voting system.

Despite the continuous protest in the CA and outside, CA chairman unilaterally declared the decision of formation of questionnaire committee consisting of 73 members.

Pro-identity, 30-political party alliance had an emergency meeting at Singhdurbar, after the CA meeting decided to formation of questionnaire committee and took the decision to the take stringent movement against the decision unilaterally taken by the NC and CPN-UML bypassing will of majority of population including that of Indigenous peoples, Madhesi, Muslim and women. Talking to the media, after the meeting, UCPN-Maoist Chairman, Puspa Kamal Dahal said the NC and CPN-UML should take responsibility of any negative consequences that may occur, upon the reaction against the decision.

On Jan. 19, there was plan that NC Chief Whip Chin Kaji Shrestha would table the proposal of questionnaire committee formation and decision to have been supported by Agni Kharel, the Chief whip of CPN-UML. But the CA members from 30 political party alliance including UCPN-Maoist were opposing the plan.

"CA chair took the decision going against all the past agreements made between the government and indigenous peoples, dalits, madhesi and muslims and their movements," Upendra Yadav Chairman of Madhesi Janadhikar Forum-Nepal, "Now there is no other option than taking movement."

Organizing a press-meet on Sunday evening, CA members representing 30 political party alliances including UCPN-Maoist declared that they would not participate in any programs organized by government including CA business and ultimately will resign anytime soon.

Similarly, they said that they would hold serious meeting on Tuesday and unveil series of strike against the decision. On Sunday evening they already conducted symbolic-movement; they took to the street and burnt the effigy. 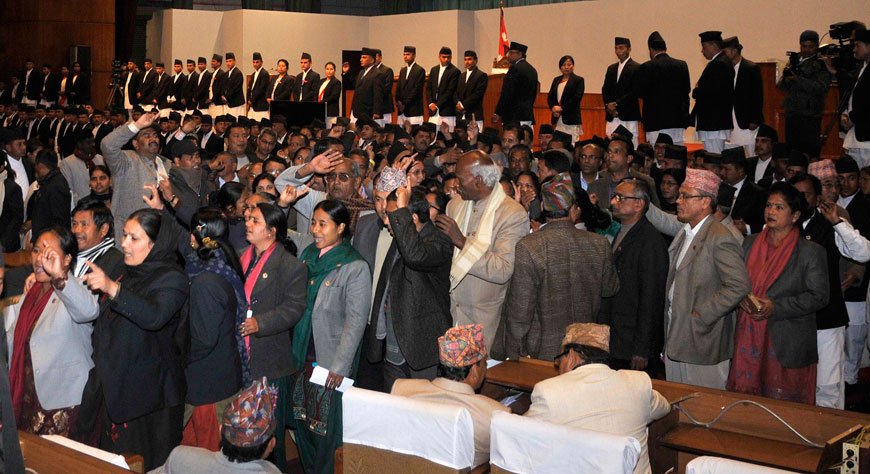 Newly endorsed committee has been mandated to draft a questionnaire on the disputed issues of the new constitution by reviewing the proposal submitted by the CA's Constitutional Political Dialogue and Consensus Committee (CPDCC).

Even though, the committee formation was endorsed by majority voting, the CA chair gave at least 10 days for the ruling and opposition parties for negotiation and then finalize questionnaire on the disputed issues.

The CA endorsed the proposal of formation of questionnaire committee, even after the opposition UCPN-Maoist and Madhesi front had asked for a few days time to forge a consensus on the disputed issues.

In a meeting with President Ram Baran Yadav on Sunday, the UCPN (Maoist) Chair Pushpa Kamal Dahal and Vice Chair Baburam Bhattarai had sought five days time for a consensus.

CA Chair also said that for the time being, the 73-member committee only has 49 members, the names of the remaining 24 members will be filled later on.

The name lists of the committee members: