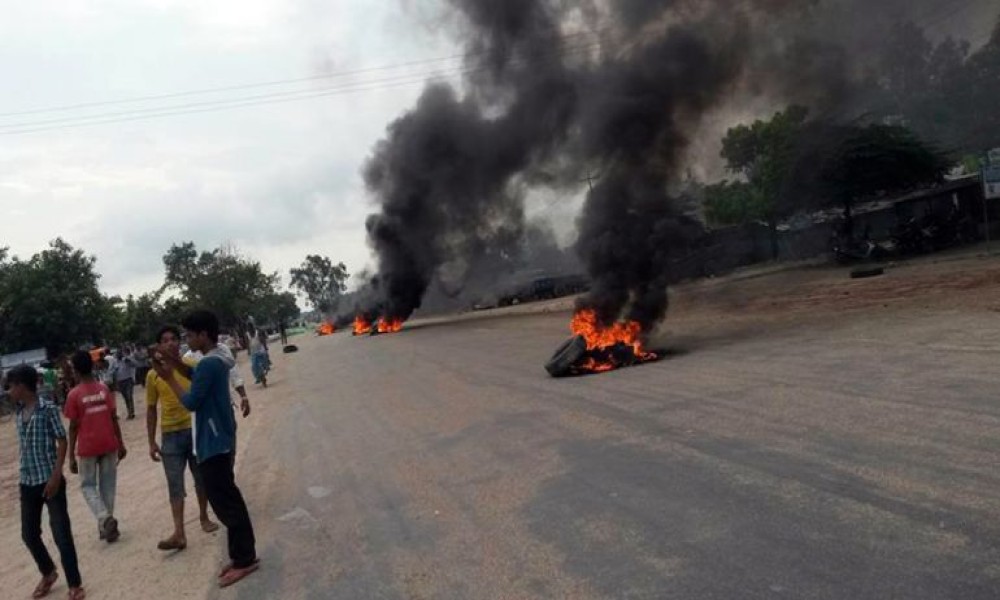 Though an exact figure is unavailable, the media report up until 10 PM Kathmandu time on Monday night, 21security personnel and 4-protestors, including top police officer and a two-year boy have been killed in Tikapur municipality in Kailali Districts in far-western regions in Nepal.

Kailali along with Kanchapur is regarded to be the homeland of Tharu, standing some 40 percent population belonging to this indigenous people.
According to the officials, SSP Laxman Neupane, a senior most police officer was killed by protestors. There are also the media reports that some of the security personnel were burnt alive.

But according to Chief District Officer (CDO) at Kailali District, Raj Kumar Shrestha, as many as six police personnel and one child were killed.
Constituent Assembly (CA) member Ram Janam Chaudhary, (who represents Tikapur, constituency where Monday’s deadly clashes occurred) however said some 5-protesters had been shot and 24 others had gunshot wounds in their legs. Majority of them are in the critical condition.

Following the Monday's incident, the government after a meeting of Security Council decided to deploy the army in several districts under the discretion of the respective district CDO. The government decision also empowered army personnel to enter anywhere including in private house, room, shop if suspect and take any stringent action to maintain peace and security situation.

Issuing a press release, many indigenous-peoples' led organizations strongly condemned the government decision to deploy the army personnel in the name of maintaining peace and security. The press release issued by Lawyers' Association for Human Rights of Nepalese Indigenous Peoples (LAHURNIP) reads, the Army mobilization to suppress the democratic movement is likely to increase the human loss and human rights violation of Tharu indigenous peoples, thus urges government and concerned institutions to revoke the decision and look for peaceful alternatives to solve the situation.

Tharuhat Struggle Committee (TSC) had been agitating in various districts against the deal made by the three-major political parties a few weeks back to federate the country into 7- province.

The deal placed Kailali and Kanchanpur placed in another district. Tharus had long been demanding to provision Tharuhat province based on the identity of Tharu.

The Army mobilization to suppress the democratic movement is likely to increase the human loss and human rights violation of Tharu indigenous peoples,

The eyewitness local journalists said the protestors who were marching peacefully to various government offices for writing their slogan were stopped by the security personnel and then triggered open fired along with tear gas to make their way through. The incident provoked protestors to attack police and their anger led to slay police personnel.

The coordinator of Tharuhat Struggle Committee and Chairperson of Tharu Kalyankarini Sabha, the representative organization of Tharu indigenous peoples, Dhani Ram Chaudhary, said, 'the incident was occured due to suppression on the peaceful and right-based movement by security personnel.

He further added that the day will be regarded as the black day in the history of indigenous peoples' movement in Nepal.

He further said that no matter what happens, Tharu indigenous peoples shall continue their struggle until their demands and rights are addressed properly in the new constitution.

Besides in Kailali, several other districts violent protests and clashes have continued over the six and lately seven province federalism deal. Following the stringent protests, the government have been imposing curfew and ordered security personnel to open fire on the agitating groups for last few days.